Our family holiday to Edmonton!
I don't have a lot of pictures, I was to busy to take pictures!

We stayed at the River Cree Marriott, yes I know it's a Casino.  Beggars can't be choosers, we stayed using reward points.   It was beautiful like most Marriotts and I was delighted to find the Casino far away from the actual hotel entrance so I didn't have to march my children through a carnival.
We took them to a more family friendly carnival, Galaxy Land at the West Edmonton Mall.    No I did not ride the Roller Coaster this time.  Something about adrenalin not feeling quite the same after babies, feels more like PANIC!
I did go on the Air Balloons, and nearly had a heart attack watching Madalyn trying to peek over the edge.  No worries people her Daddy had a good grip on her and after the ground crew applied the paddles to me and my heart started beating again I was fine too!
I found out I really don't like going in circles and if I look up and turn to quickly I'm dizzy.  Do not like being dizzy!
The kids had lots of fun.  It was really funny watching Josh on the Drop of Doom, I don't think he'll let his brother talk him into anything ever again!  Wish I'd had a picture of that, cause he's never looked like that before and probably never will again!
It was so wonderful seeing my Sister and my new Brother-In-Law.  Boy my nephews are getting big, and the newest addition was so fun to cuddle.  Love that new baby smell!
We had fun with Josh's Bro and my-sister-in law.  The 3 boys had fun gaming with their Dad's.  Not that I condone shooting your father, but it was just a game, and they did have fun.  And no real fathers were harmed during the time of our visit!
I did go shopping, at the Children's Place Outlet!  I had a 30% off coupon thanks to my smart and thrifty Sis-in law, Woot! Woot!
Madalyn did amazingly well for her first ever 12hr road trip!  Although it was the first time we ever heard her scream "No" at us like that.
We had a fun dinner and great catch-up time with my Girl BonBon!! What a sweet little family she has.  Well 3 kids isn't really a little family, but they seem so much quieter than us! :)
I was so lucky to sneak a quick lunch in with my M girl and her youngest, gigantic children.  I say giant cause it's not fair that they are taller than me!
The Telus Science World was really fun.   I especially liked the Forensic Lab and solving the dog-knapping!  Oh and the kids liked it too... I think. 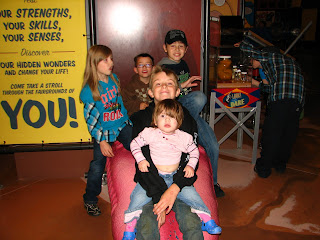 In the Body Works Part of Science World
Madalyn's favorite was this tongue, she thought it was a slide 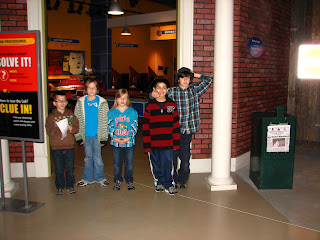 At the Crime Lab, at the top it says that but I goofed and cut it out 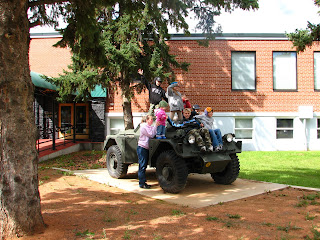 Our Military Training, this is the only picture I'm allowed to show you (jk)
Posted by Lollie at 9:55 AM