I can do it! But not while distracted:( 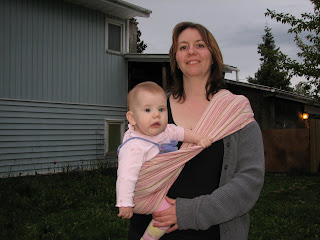 I can do it! I can sew a baby sling! I made a baby sling today, mostly by myself:) Well I did the sewing anyway. When I arrived at the cutting it out part my Mother-in-Law was here and baby wanted to eat, so she cut it out for me. I think she was as excited as I was.
Having her here was great, she explained all the sewing jargon that I couldn't understand. It turned out great. Well it's about an inch to long (or was, I fixed it). It seemed so easy I thought I'd make another one, to give as a gift.
Well by then my MIL was gone, and the boys were back for the races. Making anything that requires a brain should not have been on my list. Honestly though I thought I could handle it, they were playing a Game Cube game. The girls were planting in Oma's garden. Baby was sleeping. Hubby happily tinkering in the shop. So I'm safe....right?
Wrong!
The boys came in fighting over some body's dumb move on the game, which cost them the reward..(or something like that I wasn't really listening.) I continue to measure and cut my material as they natter away at me and then change the subject and start asking for things like computer games. OK now I have to kind of pay attention to them because I don't want to say yes to the wrong thing.
Cut the material. Tell the one boy no, and the other yes. (it's complicated). Hold up my material and......AAAAAHHH! I cut the wrong end, there is no fold anymore! and the curve is going the wrong way!!! AAAAHHHH!
So I growl a bit at the boys and chase them outside.
Now what am I going to do??
I decided that I can't fix it at this point, so I guess it goes in that pile of material for Natalie. She likes to make all kinds of things. 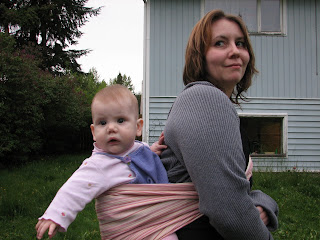 Oh well at least I got one good sling out of it. Madalyn is still getting use to it:)
Posted by Lollie at 5:57 PM